I recently attended Breakout Con, a three-day event focused on everything tabletop. I spent nearly the entire time in the Proto T.O. section, which was set up for game designers to playtest their games. There were lots of designers there but also a number of people just interested in trying out prototypes in different stages of development.

I was fortunate that my friend and co-designer of multiple games, Sylvain, was also there, and that we had the opportunity to get in playtests for all of our games. In fact, we were able to run two playtests of Isle of Rock ‘n Roll, our game about forming a rock band and competing for world domination on stage. 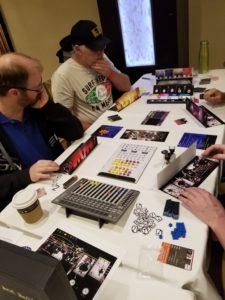 However, the results of the two playtests were vastly different.

On Friday afternoon, Sylvain joined three other players and we ran a four-player game. Overall, the game was very well received, and the only feedback was around minor balancing that could be done, which we knew still needed some adjustments. This verified what we already knew and were still tweaking.

We’ve been working on this game for a while now, and it definitely felt close to entering the stage where we would just be putting in the final touches.

On Saturday, we had the box out for Isle of Rock ‘n Roll and were discussing our next steps when some people saw the game and asked if they could play. It’s always a great feeling when this happens. The game is very visually appealing (no bragging on my own part – Sylvain is a master craftsman!) and is just dripping with the theme of rock ‘n roll.

So, we set up Isle of Rock ‘n Roll and had another four-player game, this time with two gamers and two game designers (Sylvain and I both sat out and observed). This second playtest ended very differently. While the players generally enjoyed the game, there was a lot of feedback on how to improve it. In fact, I took two full pages of notes.

There were some great suggestions to help balance the different scoring possibilities and to help create more escalation of events to the game. These were incredibly helpful, and we will be implementing many of these ideas. But at the same time, we also received some suggestions that would dramatically change the game.

We sat down the next day to debrief and talk about next steps after allowing some time for the ideas sink in. We completely agreed with the suggestions to help balance the game and brainstormed some interesting ways to add some development and ramping up throughout the game.

Other suggestions we received that would take our game away from the initial vision were set aside, at least for the moment. We are so far along in the development of the game and it has been enjoyed by many people, that we’re not looking to make any drastic changes at this point. It’s mostly about balancing the different paths to victory, along with building up the interaction and ramping up the gameplay towards the end.

This also made me think back to a previous playtest of Isle of Rock n Roll a couple of months prior, where one playtester suggested the game was a medium weight Euro. This surprised me. While I understood there are elements of the game that may feel a bit like a Euro, including the placement of fans in the stadium, there is also enough interaction and such a strong theme that Isle of Rock ‘n Roll feels like a great mix of different types of games. The intention was definitely not to create a medium weight Euro.

After further playtests, we started to think that we may need to dial the complexity down a little to make our game more accessible. We were aiming more for a light to medium strategy game that would appeal to more than just hard-core gamers. We really wanted it to be something that casual gamers with an interest in music could learn without too much difficulty, while still providing a satisfying challenge for all players.

Some other great suggestions also came from this earlier playtest I just mentioned, which helped streamline the game further. But at the same time, we avoided adding more complexity, which was being suggested by some of the more hard-core gamers. It was important for us to stick to the vision for our game and maintain a difficulty level that was still accessible to the majority of potential fans.

Knowing who the audience for your game is can be really helpful in deciphering feedback and guiding your game down the right path. If you know your players and the experience you want them to have, it’s a lot easier to know which feedback you want to try to apply to make it better, and which feedback will just make your game different.

What methods do you use to ensure you are applying the right feedback to your game? What suggestions were interesting, but you chose not to apply them because they wouldn’t necessarily improve the experience?

I thought you would like to know, it looks like you have a broken link on: /where-to-find-the-parts-you-need/

There are tools you can use to scan for these types of mistakes. One I’ve used in the past I believe was SpellingScan.com but there should be others as well.

Thanks so much, Scott! I’m not sure what happened with those links, but I have updated them and they are all back up and running.