A Board Game Success Story (continued)

…it was different. It was risqué. It really pushed the envelope.

Many clones and similar games have come along since. Crabs Adjust Humidity, Fantastic Storytelling, and What Do You Meme, just to name a few.

Other established games like Outburst, Telestrations, and The Game of Things, have developed naughty or “After Dark” versions of their game to try to get a piece of the “Not Safe For Work” (NSFW) game market.

That market is now getting saturated. So, rather than trying to piggyback off of their success, you should be thinking about how to make your own game different than anything else out there.

So, what else made Cards Against Humanity so successful? What we can learn from and apply to other games rather than just reading another “naughty” game?

First, they built this concept off an existing game – Apples to Apples. The mechanics in Cards Against Humanity are almost identical, but they changed it in a way that would appeal to a brand-new audience, by adding adult humor.

Second, they playtested it a lot. They played with different groups of friends and strangers to get their thoughts on what was good and what could improve the game. Initially, players wrote down their answers, but they later changed this to pre-written cards that players could choose from. This helped make the game faster and easier to play. Then they came up with their own hilarious or shocking answers and kept their best ones.

Third, they marketed the game really well. They started out by offering a free print and play version on their simple website, collecting emails for everyone who downloaded the game. Between this and the buzz they created by playing it at their respective colleges with other students, they were able to meet and exceed their funding goal on Kickstarter. They use this platform when it was still young, because they didn’t have the money to put into this themselves, and it also acted as a great pre-marketing tool.

Once they fulfilled their Kickstarter campaign promise, they put the game up on Amazon. Instead of using bright flashy colors to people’s attention, they went with a simple black box with white lettering, which stood out great against both their competition and the white background on Amazon’s site.

But a lot of their sales came from word-of-mouth as well as people playing their friend’s copy of the game and wanting one for themselves. The game has now gone from a cult favorite to a mass-market success.

There were a lot of things that the creators of Cards Against Humanity had to learn along the way, including playtesting, manufacturing, marketing, and distribution.

It may seem daunting for someone who wants to create their own game, but it’s really not that complicated once you understand the process.

Right not maybe you’re thinking about creating your own game.

Perhaps you already have an idea or just like the thought of making something that will bring so many people joy.

It really is an amazing feeling to create something that people love.

Imagine what it would feel like to create your own game that people can't stop playing and to see it on the shelves right there beside all your favorites.

Do you want to create your own amazing game? I'd love to help you get started so you can do this the easiest and fastest way possible.

Who am I? I’m Joe Slack. I’m a professional board game designer, author of the #1 best-selling book The Board Game Designer’s Guide, and have taught game design and development at Wilfrid Laurier University. I love helping new and aspiring game designers create amazing games! Through my book, teaching, and working directly with other designers, I've helped over 1,300 people get started in game design.

I’ve put together this super easy 10 Minute Board Game Design Blueprint to help you do just that. Now in just 10 minutes you can discover how to create your very own game.

I’ll even walk you through it, every step of the way.

Who knows, maybe you’ll create the next Cards Against Humanity! 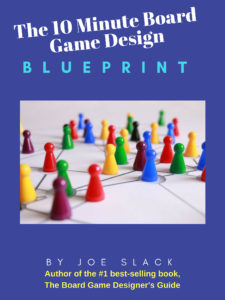 Source: Jungle Scout, Cards Against Humanity: What We Can Learn From The Most Successful Private Label Product Ever