How to Use Icons to Make Your Game Awesome

What the heck does that star mean? Or that question mark?

I guess I have to flip through the rules again…

You may not think about it too much, but iconography is such an important part of many games. When it’s done right, the game flow is seamless, but when it’s not straightforward you’ll be taken out of that flow by having to refer back to the rules or reference cards again and again.

If you want your players to have a better experience and maintain the flow of the game, it’s important to ensure that you’re using helpful symbols and icons, whether it be on your cards, boards, tiles, or other components in your game.

Here is an example of great use of icons in the game Barenpark: 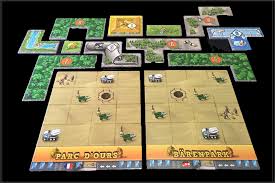 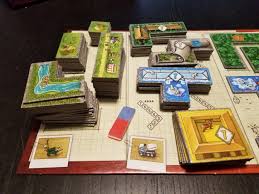 Notice how the park tiles have symbols including wheelbarrows, cement mixers, construction vehicles, work crews, and bear pits. Each one of these is also represented on the main board to indicate where you can choose your next piece from based on which squares you covered in your bear park, or that you can add a new tile or bear statue to your park.

In addition, the main board shows how to easily set up the game without having to look through the rulebook. Based on the number of players, you select the pieces of certain values and include them on the main board.

Here’s another example from the game Forbidden Island:

It’s very easy to see which tiles you must travel to in order to collect any of the four treasures. Also, the player starting tiles and helicopter pad are easily distinguishable.

I just started working with a friend on a new game called Night Hawkers. I printed off a quick board to try out the concept and it felt okay, but a little bit dry.

Then I remembered what I had learned from these other games, and prototyped a much better board. I used these examples as an inspiration and made sure that all the spaces on the board were indicated clearly with the number of players, as well as which areas were active during the daytime and nighttime. 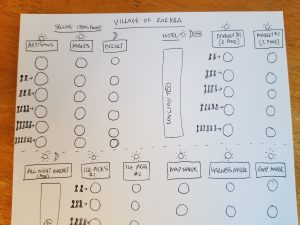 The next playtest was considerably better. Although the board was hand-drawn and not as attractive as the first version, it was much easier to understand and see what was going on.

What games have you played that have had really great iconography? What was it about the symbols and icons that made the game more intuitive and enjoyable?