Have you ever heard of the tiny Italian mountain village Viganella? Neither had I until recently.

They had a bit of a problem. Due to the position of their village, for 84 consecutive days every winter, they received absolutely no sunshine. They were positioned in such a way that the Italian Alps completely blocked the sun.

So, did they just decide to live with this? Did they move the whole village to another location?

No. They came up with a solution that was both simple and clever.

In 2006, the people of Viganella actually installed a 26-foot mirror on a slope above the village. This allowed sunlight to be reflected down upon them.

A computer tracks the sun’s movements, ensuring the village receives plenty of sunlight throughout the winter.

This cost the village about $100,000, which is considerably less than it would have cost to uproot all the villagers and move them elsewhere.

Applying this to games

“Simplicity is the keynote of all true elegance.” – Coco Chanel, French fashion designer and businesswoman

So, why do so many games have to be so complex?

Well, they don’t have to be. It’s up to the designer to determine how complex a game is.

There are plenty of examples of games that are easy to learn and play, yet still have a lasting appeal. They have the advantage that each game is both engaging and different than the last. All without requiring players to spend hours reading rulebooks.

Party games are a great example of this. They don’t involve a ton of thinking, rather they rely on the social interaction between players.

Take Cards Against Humanity and Apples to Apples for example. Each has sold millions of copies. I’m hardly saying these are the best games of all time, rather they are simple enough for anyone to play. All you have to do is take a card from your hand and give it to the judge. Then the judge picks their favourite.

However, one of the downsides to many party games is that you will eventually go through all the cards and need to buy expansions or move on to another game once it’s overstayed its welcome.

But it’s not just party games where simplicity can lead to an engaging experience and commercial success through simplicity.

Strategy doesn’t have to mean a 3-hour game

There are some great games that appear to be really simple at first glance, but you soon realize there’s lots of strategy and more in-depth gameplay involved.

A great example of this is Azul. 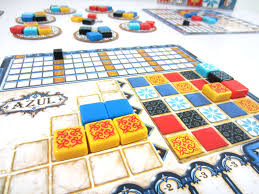 On the surface, it couldn’t be much more straightforward. Take all the tiles of one color from one of the factory tiles (or “coasters” as I like to call them) and add them to one of the lines on your board. All players repeat this and the round continues until all the tiles have been taken. But where the challenge starts is where to place the tiles.

You have five different rows in which tiles can be placed, in quantities of 1 to 5. Once a row is filled, a tile is moved over to your wall (main board) and scored. But only one of each type can be used in each row. And if you have too many to fit in your row or nowhere to place them, you’ll take a penalty.

The drafting of the tiles is also really interesting. Not only are you thinking about how to best select tiles for your board, you also don’t want to make it easy for your opponent(s). Sometimes you have to engage in “hate drafting”, meaning you select tiles not necessarily for your own advantage but rather to disadvantage the next player. In Azul, you can sometimes leave another player with a whole bunch of tiles they can’t use, which really racks up negative points.

If you haven’t played Azul yet, I would highly recommend you give it a try.

A warning: Once you play this game, you’ll likely want to buy it. Azul is that good. So be sure you have the funds for this on hand. ?

Keep your players in mind

Most players don’t want to read a 30-page rulebook or have to constantly be referring back to it throughout the game. It pulls you away from the experience and breaks the flow of the game.

So, when you’re making your game, try to think of ways you can make the rules and gameplay easy to understand while including plenty of strategy and variation in the game to keep players engaged and wanting to play again.

What’s your favourite game that’s simple to learn and teach but has enough interest and strategy to keep you coming back for more?