The underdog. The longshot. The comeback kid.

We all love to see that down-and-out hero break all the odds and somehow manage to pull off that heart-wrenching victory.

It’s the Cinderella story of a team barely scraping by to make the playoffs, then somehow finding a way to squeak through to the finals and win the championship game.

It’s the woman that was told she’ll never amount to anything, but then goes on to do something amazing. Something nobody thought she could ever accomplish. 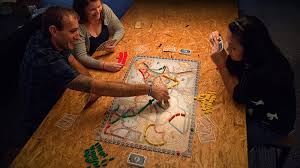 Although this story happened many years ago, it’s one that I won’t ever forget. One night my wife, Lisa, and I had our friends, Dave and Renée (another couple), over for dinner and to hang out. Later in the evening, we decided to play a board game. Unfortunately, I got outvoted and the choice was Monopoly. Not my favorite game to say the least, but I was doing this for my friends, so I grudgingly agreed.

About an hour or so into the game, Renée lost everything and she was out. Not much later, it was my turn to declare bankruptcy.

That left just Dave and Lisa. Unfortunately for Dave, he had very little money left, and just two properties: Boardwalk and Park Place.

Lisa owned absolutely everything else and was sitting on a big pile of money as well.

What happened next was the part I will never forget.

Despite the fact that nobody else had landed on Boardwalk or Park Place the entire game other than to first purchase them, seven of the next eight circuits of the board, Lisa landed on one or the other. Of course, every time she did this, Dave was using his money to put up more houses and eventually hotels, costing her to pay higher rent every time.

All the while, Dave was somehow managing to dodge most of the other properties, only paying out small amounts for rent here and there, but always staying alive.

It took about two hours more to finish and the game ended just before 2 AM. Dave eventually wore Lisa down, inheriting all of her properties and leaving her bankrupt.

Despite the fact the Monopoly is a game that I have not enjoyed since I was a kid, the memories of playing it that particular night will live forever. We still joke about it to this day and probably always will.

When you’re making a game or even when you’re just playing one, think about how a player who has fallen behind is going to feel. Do they still have hope? If there’s still a chance they could win or at least make it really close?

You never want to have the problem of the runaway leader. If other players don’t feel like they still have a chance of winning, they will quickly become disengaged and may not want to play that game ever again.

Including some type of catch-up mechanic to ensure everyone is still in the game, or at least to feel that they are, can be very effective. Just make sure that it doesn’t swing so far the other way that the losing player gains a huge advantage. This could incentivize players to not play optimally until the very end of the game, making the leader who was just been overtaken feel that they couldn’t do anything to prevent this, no matter how well they played.

You want to make any catch-up mechanics subtle and built right into the game so that it doesn’t feel like something has been tacked on to ensure the game remains close.

One example from videogames is Mario Kart. If you fall far behind, you often get helpful item such as the bullet, that will help you get back into the race.

In terms of board games, Catan incorporates a robber as well as trade between players that can mitigate the runaway leader issue. However, some players feel this takes on a “bash the leader” vibe. Belfort is mentioned as a better example, with its taxation system.

Many other games that are well-balanced don’t even feel like they have a catch-up mechanic. It’s that seamless and well-integrated into the game.

Look at Ticket to Ride or 7 Wonders.

The use of hidden goals and hidden points in Ticket to Ride ensures that no one is completely sure they’ve won until the very end.

There are so many ways to score in 7 Wonders that it’s pretty difficult to determine exactly where you stand. A great last play can take you from being behind to pulling of that unexpected win!

The thrill of the comeback is fun to experience and even just to watch.

What’s your comeback story? Come back from back from insurmountable odds in a game or seen someone else to this?

Great information! Never really thought about it from the game designer point of view, but it makes perfect sense to include engagement related behaviors that make everyone want to play or enjoy the home stretch.

This is a great reminder to think holistically about balancing the game experience for all players. As a designer you’re often focused on ways to keep players in the game, but not about what that experience will be like if players feel like they’re hopelessly lagging behind. At that point, you have to wonder if it’s about the same as not being in the game at all. Thanks for the pointers to the games that do it well!

My pleasure, Emily! If you have any other examples, I’d love to hear them.