How to make a topic as boring as rocks exciting

“Can you make a fun game about the rock formation cycle?”

This was a recent challenge posed to me by one of my son’s former teachers.

I’ve been working with the principal and some of the teachers at this school for a while now, and have been developing some fun classroom games that just happen to also teach them something about the topic they’re learning.

And that’s where the challenge lies.

If you remember back to when you were in school, maybe you can recall your teachers trying to make classroom learning more fun by introducing a game. But was it fun? Maybe or maybe not.

Some of my recollections are of Jeopardy-style games where the teacher incorporated trivia questions about the subject at hand. But were we really learning anything from this or just recalling facts that we already knew (or were supposed to have known)?

It’s easy to fall back on something simple like this when you’re asked to create a game for someone, particularly if the teacher isn’t looking for something too complicated.

One of the ideas she proposed for teaching the rock formation cycle was having the kids match up a particular item, such as a specific type of rock, to its definition. I could see where she was going with this, but I wanted to create something much more engaging. Something that would teach the kids about the topic and help reinforce what they had already learned, but something they would also enjoy.

So, I started doing my research.

I learned all about igneous rocks, metamorphic rocks, and sedimentary rocks. I also got a better understanding of the events that caused rocks to change over time.

Then I started to think about ways I could incorporate this in a much more engaging way than just matching up the rocks to their definitions.

I really like cooperative games in the classroom, as they teach students not only about the subject at hand, but also how to collaborate and work together rather than compete with each other. If you don’t work as a team in a co-op game, you won’t succeed.

So, I took inspiration from some other great cooperative games that I own, including Forbidden Island and Forbidden Desert. I appreciate the tile layout and searching/flooding mechanisms in these games and wanted to borrow some of these ideas for my game. 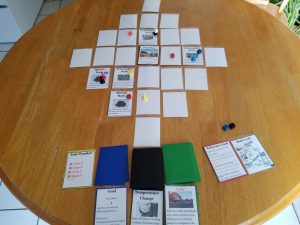 I Wanna Rock – A game about the rock formation cycle that’s actually fun to play!

I also wanted to incorporate the different changes that can take place to the rocks over time and give players a challenge in that the rocks have the potential to change over time. This would mean that they must decide whether to collect them as soon as they are discovered, or leave them where they are so that they can collect them at a later time (possibly after they changed). But they also had to keep to their hand limit.

I created goal cards so that players would have specific rocks they needed to collect at different times. They had to gather these rocks and share amongst each other so that one member of the team could return them to home base and they could move on to the next goal.

But there also had to be some pressure on the players. Since many of the students hadn’t played a lot of board games, particularly modern ones, I didn’t want the game to get too complicated or to stress them out. So, I created an event deck that each player would draw from after their turn. These events would change whatever rocks were left exposed, but there were also a couple of “end of year” cards in the deck, which would increase year tracker whenever they were drawn. The teams had to complete all their goals before their time ran out in order to win.

But I also noticed during initial playtesting that sometimes things were out of the player’s control and they had nothing to do because they were waiting for events to happen so that the rocks would change to the type they needed to collect. I didn’t want players sitting around waiting for the game to help them, so I also added in tool cards, which players would also draw at the end of their turn. These could be used to help them adjust the types of rocks that were exposed.

So, I took the game in last week and played it with the grade four class. There were 25 students, so we broke them into four groups of 6 to 7 students each and had them play. After explaining the rules, I went around to the different groups as they set up and started playing this for the first time. After some initial clarifications of the rules, they got right into it and were working together to collect their rocks.

After playing the game, I asked them lots of different questions about the game, and it was overwhelmingly positive. In a world filled with video games, mobile games, and tons of other distractions, it really makes it all worthwhile when a child says “that was the best game I’ve ever played!” and is referring to a tabletop game.

So, even when you’re tasked with creating an educational game, your goal should always be to make it engaging and interesting for players. If the players or students learn something from it without even realizing, you know you’ve done a great job.

What are some games you’ve enjoyed that you’ve also learned something from? How did the designer make it fun without it feeling like a typical “educational” game?

Making educational games fun is quite the challenge. You want kids to learn something new or at least to reinforce and expand upon what they already know. Playtesting is key as I am doing the same now for both a new word game and a math game. Your own expectations are surprised when kids come up with different ways of playing you never thought of, since we don’t always think like kids. Simple is best I find.