It seems as though these themes have been done to death. Yet they still sell.

Although the market is crowded, especially related to these themes, there still seems to be room for new, similar games, as long as there’s some kind of twist to make them different and stand out from the others.

So, you can definitely ride a trend, see what’s starting to become more popular, or think about an IP (licensed game). Or, you can come up with something completely unique and innovative.

There are a few themes I haven’t seen a lot of in board games that I would love to see explored further:

This is a really fun theme that I’ve seen done in a few different ways, but feel that there is a lot of room to expand upon this. Games like Incan Gold, where you have to decide whether to press on to gather more treasures, or escape with what you have, can be a lot of fun.

There’s room to explore this genre even further, delving into different mysteries, treasures, and stories. There’s just such a rush with a game that makes you feel like you’re Indiana Jones – dodging traps, collecting treasures, and escaping just in the nick of time.

Think about films like Deep Impact or Armageddon. What would it feel like to be players in a game, co-operatively trying to save the Earth from impending doom?

What if each player had a different character with unique abilities, something similar to Pandemic or Forbidden Island? You’d all have to work together in order to succeed, with everyone on Earth depending on you.

You’d have to use your wits to plan out the best course of action, all while facing impending doom.

Now that’s a game I want to play!

There are a few games I’ve seen about managing a rock band or something similar, but I haven’t played one that truly captures the feeling of forming a rock band and going through all the different events that a band may experience.

I’ve actually been working on a game like this myself. It ended up sitting on the shelf for about a year because I just couldn’t get the feeling right. But I’ve resurrected this with the help of an amazing friend and co-designer. I talked about the benefits of co-designing in a previous blog, and this game, in particular, has seen some incredible improvements since I’ve brought on help. 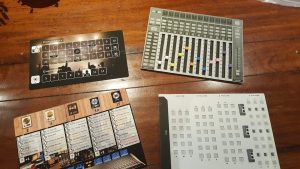 This idea also actually helped my co-designer come up with an unrelated music game, unlike any other game I’ve seen before.

It’s truly awesome to see where one idea can lead.

What interesting, less-explored themes would you like to see in more games? Have you come up with any cool themes you haven’t seen before?